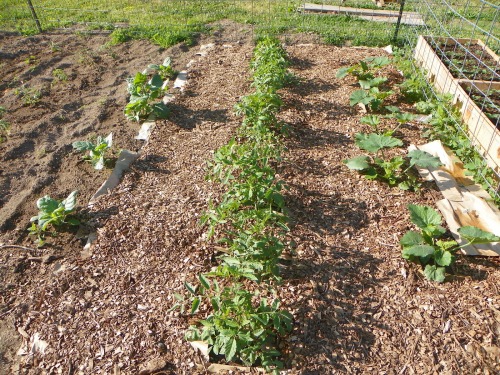 If you’re passionate about your health, you ultimately will reach the conclusion that the quality of the food you eat in large part determines your health. You need nutrient-dense, non-GMO or non-glyphosate contaminated foods to stay healthy.

You can purchase organic from the store but this is typically shipped long- distance, and in many cases from a different country. You can purchase from local organic farmers but you still have logistical challenges and it may have been picked several days prior to your eating it.

Fortunately, regardless of your income, it is possible to nearly effortlessly grow your own food right in the comfort and convenience of your own backyard and virtually eliminate the time from harvesting to eating.

Paul Gautschi has been a personal inspiration to me, and his garden is a testament to the fact that growing large amounts of healthy food can be very simple, and doesn’t require a lot of time.

The documentary Back to Eden was my first exposure to his work. I struggled for years seeking to unlock the puzzle of growing nutrient-dense food before I came across his recommendations—the simplicity and low cost of which really appealed to me.

The key to growing nutrient-dense food is to have a soil that is abundant with microbial life and nutrients. Sadly, very few of us have access to this type of soil but the good news is that it is relatively easy to create it.

After studying his technique more carefully, I realized that using wood chips is probably the single best way to optimize soil microbiology with very little effort.

Shortly after watching the film, I called my local tree cutting service and was able to get three truckloads of wood chips dropped on my driveway for free, which I then spread onto my landscape. Each load is around 10-15 yards and weighs about 7-10,000 pounds. So far I have had 13 truckloads delivered and I plan on doubling that.

You can actually use virtually any organic material for mulch but wood chips seem to be one of the best, as they are concentrated sources of carbon that serve to feed the complex soil ecology. Typically, carbon is one of the nutrients that is far too low in the soil.

Additionally, by covering the soil around your plants and/or trees with mulch, you mimic what nature does naturally, and in so doing, you effortlessly maximize the health of the soil. And soil health, as I’ve discussed in many previous articles, is the key to growing nutritious food.

Actually, the effortlessness comes after you do the hard work of moving the chips to where you need them to be. But once there, over time they work their magic and virtually eliminate the most concerning garden tasks, which is weeding, watering, and fertilizing.

Covering the ground with wood chips dramatically reduces water evaporation, thereby minimizing the need for watering. The wood chips also tend to absorb moisture from the air at night and release it back into the soil during the day when the plants need it.

Water shortage was in fact part of what inspired Paul when he first began. He’d moved from Los Angeles to Washington State where he built a house and planned an orchard. The problem was, his well didn’t produce enough water for irrigation.
“It was August ‘79… It didn’t rain the whole summer… And I’m saying, ‘God, how am I going to grow fruit trees for my family without water?’”

His answer lay in the woods behind his house. Those trees were all lush and green, and when he poked around, he realized they were surrounded by deep, dark, lush, fertile soil—courtesy of all the fallen leaves and twigs that had never been cleared away.

Read the full story via Wood Chips: The Secret to Inexpensive Biodynamic Gardening.