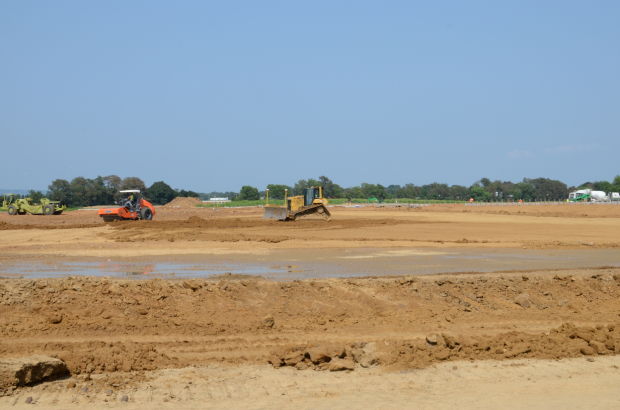 By Joshua Vaughn, The Sentinel,

MIDDLESEX TOWNSHIP — A large greenhouse meant to grow organic produce is beginning to take root in the Midstate.

Toigo Organic Farms LLC, of Shippensburg, has begun construction on the first of potentially three greenhouses in the 300 block of Old Stonehouse Road North with an estimated cost of construction of nearly $1.8 million, according to a stormwater management plan filed by Toigo in May.

The greenhouse, imported from Bom Greenhouses in the Netherlands, will be more than 240,000 square feet, covering nearly five acres of land, and will be used to grow organic tomatoes, according to Mark Toigo of Toigo Organic Farms.

“The demand for local and organic food is certainly here,” he said. “Central Pennsylvania is certainly a great place to produce.”

According to Toigo, the tomatoes will be grown to USDA organic standards, which are guiding rules for farms to follow certifying organic status. To be considered USDA organic, a farm must not use irradiation, sewage sludge, synthetic fertilizers, prohibited pesticides and genetically modified organisms in the growing of crops.

Only USDA-certified products are supposed to be labeled “organic.”

The greenhouse will use biocontrols like advantageous insects — ladybugs, encarsia and wasps — to help control pests that might otherwise be dealt with using pesticides in non-organic farms.

“Basically, it’s a bug-eat-bug world out there,” Toigo said. “What we do is introduce a lot of breeding disrupters and biologic controls.”

Another major feature of the greenhouse’s organic culture is the recycling of rain water for irrigation.