How Organic Farming Prevents the Use of Fertilizers 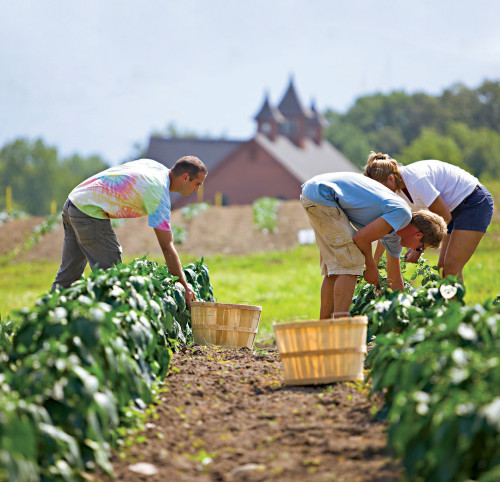 Environmental pollution is a significant problem. But while most of the focus is placed on polluting industries, toxins like mercury and small particle traffic pollution, a major source of environmental devastation is caused by modern food production. Far from being life sustaining, our modern chemical-dependent farming methods:

For example, many areas of Minnesota, which is prime farmland, now face the problem of having dangerously elevated levels of nitrogen in their drinking water.

The conversion of grasslands and pastures into chemical-driven, industrial crop land has eliminated much of the natural filtering of ground water that such native landscapes typically provide. Health risks of nitrogen include a potential connection to cancer, as well as thyroid and reproductive problems in both humans and livestock.

Looming Fertilizer Shortage Could Spell the End of Modern Agriculture

Modern fertilizer consists of varying amounts of nitrogen (N), phosphorus (P) and potassium (K). These three are believed to be essential for plants to grow, (below, I’ll discuss why NPK may not be as necessary as we think.), and are extracted from the soil with each harvest.

This is why farmers spread fertilizer on their fields, to replace the nutrients lost. It’s certainly not the ideal and sustainable way to farm, but it’s thought to be the most efficient for large-scale farms. Strategies like crop rotation and allowing large fields to rest would cut too deep into profits that are based on quantity, opposed to quality.

Unfortunately, the Earth’s soil is now being depleted of nutrients at more than 13 percent the rate it can be replaced. Not only that, but according to some, we may also be facing looming shortages of two critical fertilizer ingredients: phosphorus and potassium.

A 2012 article in Mother Jones1 discussed “peak phosphorus and potassium,” drawing lines of similarity between the diminishing reserves of these natural elements and “peak oil.”

According to well-known investor Jeremy Grantham, writing for Nature:

“These two elements cannot be made, cannot be substituted, are necessary to grow all life forms, and are mined and depleted. It’s a scary set of statements. Former Soviet states and Canada have more than 70 percent of the potash. Morocco has 85 percent of all high-grade phosphates. It is the most important quasi-monopoly in economic history.

What happens when these fertilizers run out is a question I can’t get satisfactorily answered and, believe me, I have tried. There seems to be only one conclusion: their use must be drastically reduced in the next 20-40 years or we will begin to starve.”

This largely unknown issue may end up playing a more significant role than you can currently imagine, because it cuts to the heart of the sustainability of modern agricultural practices, or rather the lack thereof.

“[T]he next time someone facilely insists that the ‘industrial farms are the future,’ ask what the plan is regarding phosphorus,” Mother Jones writes. “Developing an agriculture that’s ready for a phosphorus shortage means a massive focus on recycling the nutrients we take from the soil back into the soil—in other words, composting, not on a backyard level but rather on a society-wide scale.

It also requires policies that give farmers incentives to build up organic matter in soil, so it holds in nutrients instead of letting them leach away… Both of these solutions, of course, are specialties of organic agriculture.”

Monoculture (or monocropping) is defined as the high-yield agricultural practice of growing a single crop year after year on the same land, in the absence of rotation through other crops. Corn, soybeans, wheat, and to some degree rice, are the most common crops grown with monocropping techniques. In fact, corn, wheat and rice now account for 60 percent of human caloric intake, according to the UN Food and Agriculture Organization.2

By contrast, polyculture (the traditional rotation of crops and livestock) better serves both land and people. Polyculture evolved to meet the complete nutritional needs of a local community. Polyculture, when done mindfully, automatically replenishes what is taken out, which makes it sustainable with minimal effort.

If it’s true that we may at some point face a shortage of phosphorus and potassium, large-scale farming facilities would be hard-pressed to produce much of anything after a short while. Such shortages might even lead to geopolitical strife, as phosphate rock is primarily concentrated in the occupied territory of the Western Sahara region of Morocco. It may sound farfetched to some, but how far would a nation go to secure access to such a location if the future of the entire agricultural industry and food supply depended on it?

Monocropping Is NOT the Way to Feed a Growing Population

The evidence tells us that forging more sustainable alternatives is imperative if we hope to survive. Yet proponents of factory farms and genetically engineered crops argue that monocropping, or crop specialization, is the only way to feed the masses and that it’s far more profitable than having small independent farms in every township.

But is this really true? A number of studies show just the opposite! In fact, studies are showing that medium-sized organic farms are far more profitable than ANY sized industrial agricultural operation.

For example, researchers at the University of Wisconsin’s College of Agriculture and Life Sciences and Michael Fields Agricultural Institute3 (results published in 2008 in the Agronomy Journal)4 found that traditional organic farming techniques of planting a variety of plants to ward off pests is more profitable than monocropping. The organic systems resulted in higher profits than “continuous corn, no-till corn and soybeans, and intensively managed alfalfa.”

via How Organic Farming Prevents the Use of Fertilizers.