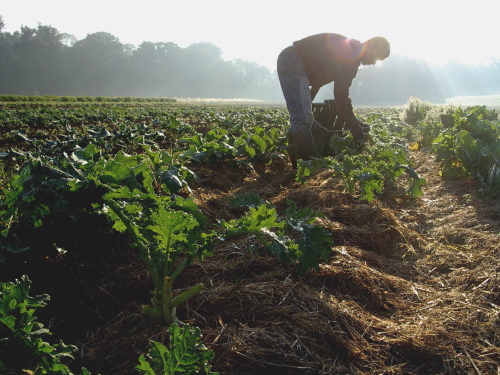 When it comes to groceries, “organic” and “sustainable” usually mean “expensive.”

But the supposed productivity gaps between organic and conventional farming may be a lot smaller than thought—and organic farming may be especially competitive during droughts like the one currently crushing California’s massive agricultural sector.

A new analysis of more than 100 studies conducted by researchers at the University of California, Berkeley, concluded organic farming created a unique mix of biodiversity in the soil and surrounding environment that is difficult to mimic with synthetic chemicals. The researchers analyzed what they say is the largest data set ever compiled on organic and conventional methods across an index of about 50 common crops.

The findings were published Tuesday in the journal the Proceedings of the Royal Society of London.

They did find a productivity gap—organic farms are almost 20 percent less productive than conventional ones, a number still lower than conclusions drawn by many previous studies. The group also thinks that that gap could be reduced or even totally eliminated by further investment in organic farming research, education and seed breeding.

“With global food needs predicted to greatly increase in the next 50 years, its critical to look more closely at organic farming because, aside from the environmental impacts of industrial agriculture, the ability of synthetic fertilizers to increase crop yields has been declining,” said Claire Kremen, one of the researchers who worked on the report.

The assertion that organic farms can compete with conventional ones—especially during droughts or other adverse weather—is not new.

Separately, the Farming Systems Trial at the Rodale Institute in Pennsylvania has been comparing the productivity of organic and conventional farms since 1981. The institute uses common organic farming methods in some plots and farms more conventionally in others, using popular pesticides and growing genetically modified organisms in its conventionally farmed plots. It found that the organic plots on its own property outperformed the conventional ones, especially when things turned tough.

The organic plots were especially more resilient to droughts, and other weather events such as frost and flooding.