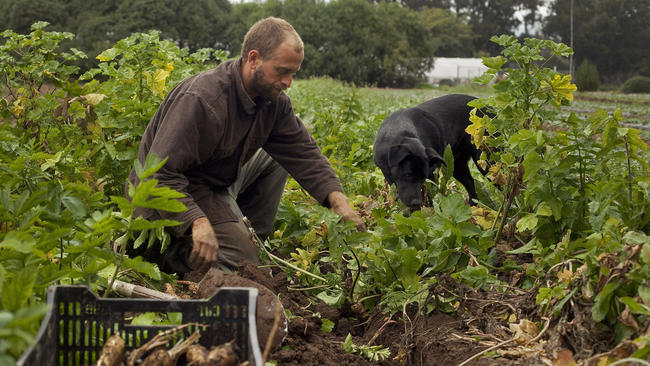 By 9 a.m., Jack Motter had been planting peas for hours.

He pushed a two-wheeled contraption that deposited a seed every few inches along neat rows at Ellwood Canyon Farms, just outside Santa Barbara. As clouds gathered overhead, he picked up the pace to avoid losing days of work to the fall rain.

Timing can mean the difference between profit and loss for the 4-year-old farm.

Motter and his business partner, Jeff Kramer, are part of a growing crop of farmers — many of them young — choosing to produce food without pesticides and synthetic fertilizers. As consumers demand more fresh and local food grown with minimal environmental effects, a new generation has taken up organic farming.

The two Brawley, Calif., natives, both 30, have learned that small-scale agriculture is neither easy nor lucrative. Their days on the 15-acre farm start at dawn and end with exhaustion.

“There’s nothing romantic about it,” Kramer said. “It’s hard work and long hours for little pay.”

Agriculture officials are hoping more young people heed the call to till the land, whether organically or conventionally, as the average age of California farmers continues to climb. It hit 58 in 2012, up by nearly two years from 2007, according to the U.S. Department of Agriculture’s most recent census.

Older agricultural operators outnumber their younger counterparts 6 to 1, the data show. There are fewer than 6,400 farmers ages 25 to 34 in California.

Agriculture trade groups have developed programs, including training and financial incentives, aimed at attracting young people. The National Young Farmers Coalition through member surveys has found that the bulk of new operators are going the organic route.

Many new farmers are motivated primarily by the desire to show that mainstream methods aren’t the only way to grow food.

Large conventional farms can churn out commodity crops quickly and economically. The average American farm, tilled by heavy machinery, is now 434 acres, up from 418 in 2007, the USDA reported recently.

But changing consumer preferences for locally grown and organic food have paved the way for young farmers to carve out a niche.

Chris Velez is among them. About 300 miles north of Ellwood Canyon Farms, Velez has spent nearly 10 years farming five acres in Auberry, Calif. He sees the work as a mission.

“The Earth is in a pretty dramatic state,” he said. “It’s truly calling for people to come tend to the land in a healthy way.”