Controversy Erupts Over Process of Allowing Non-Organics in Organic Agriculture 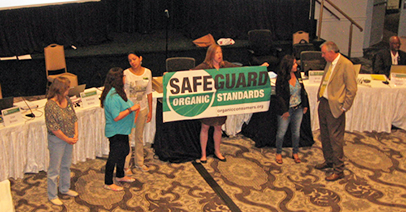 Rumblings over a new USDA policy about which synthetic (non-organic) materials can be used in organic agriculture sparked heated blowback on legal and political fronts during a four-day meeting late last month of the National Organic Standards Board (NOSB) in Texas.

Those against the new policy believe it could make it more difficult for the NOSB to phase out allowable synthetic and non-organic materials from organic foods and therefore weaken organic standards.

Members of the Organic Consumers Association held a protest at the recent National Organic Standards Board meeting in San Antonio, TX.

Attracting the most media attention was the April 29 arrest of Alexis Baden-Mayer, political director of the Organic Consumers Association, who was handcuffed and hauled away by the police. Banner waving and chanting against the change also marked opposition tactics during the meeting.

“It’s a terrible change to the process,” Baden-Mayer, who was charged with criminal trespass and released on a $1,000 bond, told a Capital Press reporter.

Then there was a letter fired off to USDA Secretary Tom Vilsack several days before the meeting  by two members of Congress — the principal authors of the 1990 Organic Foods Production Act — expressing dismay over the new policy and asking USDA to review it.

Synthetics? What’s this all about?

But wait. Isn’t food bearing the organic seal supposed to be produced without the use of materials such as synthetic pesticides and factory-made fertilizers? The answer to that question is, “Yes, almost always — but not always.”

It turns out that some crops or livestock can’t be raised without synthetic materials. But that doesn’t mean farmers get a free pass to use them forever. Instead, these materials are put on a “National List of Allowed and Prohibited Substances,” which lists exceptions to the ban on synthetics in organic farming. After five years, under a “sunset process,” the material in question is to be automatically removed from the list — unless a two-thirds majority of the NOSB votes to keep it on the list.

At least, that’s the way it’s been done for the past decade.

The underlying goal of the “sunset process” is to motivate the industry to find or develop organic alternative materials. This, in turn, fits in with the consumer’s desire to keep foods bearing the organic seal as “pure as possible.”

An important part of this process is the opportunity for interested parties such as farmers, processors, consumers and organic groups to submit comments during two public meetings.

A good example can be seen in what happened to hops, a key ingredient in beer. Previously, non-organic hops were allowed to be used in organically made beer. But, in 2010, the NOSB allowed conventional hops to sunset from the list, effective 2013. As a result, only hops that are grown organically may now be used in beer that’s labeled organic.

Although the system appeared to be working well, USDA reversed this policy last fall without going through a public process to do so. Now, even though the materials will still be reviewed, a synthetic material will stay on the National List unless a two-thirds majority of the board votes to remove it.

In other words, it’s going to be harder — some opponents say almost impossible — to remove these materials from the list.

“The land of the midnight sun,” is how Mark Kastel, co-founder of organic industry watchdog Cornucopia, describes this change to the sunset process. It matters, he said, because it’s about consumer confidence and the integrity of the industry.

“Organics is not supposed to be controlled by corporate interests or by minions at the USDA,” he told Food Safety News. “It’s supposed to be an alternative to conventional agriculture, and the lines between the two shouldn’t be blurred. The NOSB plays a key role in this. The NOSB meetings are where the rubber hits the road.”

Kastel said that the concern now is that a troubling number of current NOSB members are representatives of industry heavyweights such as Earthbound Farm, Driscolls, Whole Foods, CROPP Cooperative and Zirkle, although smaller-scale farmers and processors are also in this mix of members.

“It’s a power grab,” he said, referring to the larger companies and their increasing influence on the industry, which, at its beginning, was rooted in family-scale farms and operations.