A New Study Finds That Plants Can Hear Themselves Being Eaten 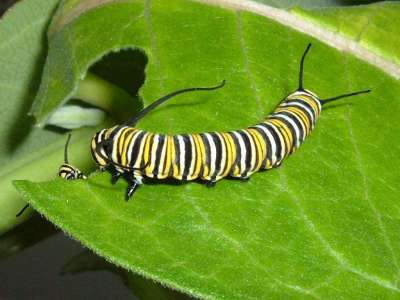 And It Could Mean The End of Pesticides!

We know that plants can sense and react to changes in the temperature, to harsh winds and even to physical stimulus, but a new study completed at the University of Missouri finds that plants can actually hear.

A study that was published last Tuesday in the journal Oecologia who also partly funded the study has shown that plants can actually hear when a caterpillar is chewing on their leaves.

While plants have no particular structure in place to hear sounds like humans do, the study shows that plants can listen to the particular vibrations that a sound creates and then they react accordingly.

And apparently, it works similar to our own immune systems.

While our first experiences with a particular bacteria or insect might result in serious illness, our bodies learn from the experience and helps us defend against the same attack in the future.

Similarly, the mustard plant may not defend themselves well the first time they’re attacked by a caterpillar, but they learn from that experience and the next time it occurs they release a chemical that covers their leaves with a toxic for caterpillars chemical.

Biologists from the University of Missouri have found that this process called “priming” can be triggered by sound alone.

HOW THE STUDY WAS CONDUCTED
The study took one group of plants related to mustard and cabbage plants and exposed them to the recorded sound of a caterpillar chewing on a leaf, and another group of plants were left in silence.

When the two groups were later exposed to a real caterpillar, the plants that heard the chewing noises beforehand produced more insecticide-like chemicals glucosinolates than that of the silent group. Glucosinolates is the same chemical that gives mustard that special kick, but if it’s eaten in large quantities and if you’re a small caterpillar the chemical becomes toxic.

Not only this, but it seemed that the louder the sound was played, the more glucosinolates the plants released!

The plants also seemed to be able to identify the difference between the dangerous sounds of a caterpillar and the safe sounds of wind and insect mating calls, as the plants didn’t produce the same amount of chemicals.

The logistics of how the plants do this are still unknown, but it leads us one step closer to a massive breakthrough.

Why?
Well, if we can figure out what triggers a plants own defense mechanisms, it could mean the end to pesticides.

Read the full story via A New Study Finds That Plants Can Hear Themselves Being Eaten – And It Could Mean The End of Pesticides! – Greener Ideal.

⇐ Wood Chips: The Secret to Inexpensive Biodynamic Gardening
The Solution Is the Soil: How Organic Farming Can Feed the World and Save the Planet ⇒
Copyright © 2011 - 2020 Grow Switch LLC | Santa Barbara, CA | (949) 542-6492
Powered by UnitedThemes